The Nationals won't be rushed into an agreement on net zero emissions, David Littleproud says, after a marathon four-hour meeting ended with no resolution.

The junior Coalition partner has also warned Prime Minister Scott Morrison he could travel to next month's COP26 climate summit in Glasgow without its backing for the target.

Nationals MPs met on Sunday afternoon to thrash out a position on Energy Minister Angus Taylor's plan to reach net zero emissions by 2050, but the stalemate remained despite talks lasting four hours.

Deputy Nationals leader David Littleproud said it would be "a little presumptuous" to expect the party room to reach a decision so soon after being briefed on the plan.

Mr Taylor pitched the plan to Nationals MPs, seen previously only by select Nationals cabinet ministers, at the beginning of the meeting.

But Mr Littleproud warned there were still many technical questions to be answered, and the party needed to further understand how the proposal would impact regional Australia.

The deadlock raised the prospect of Mr Morrison traveling to Glasgow in November without a 2050 target approved by his own government. But Mr Littleproud said sparing his blushes would not pressure the Nationals into a hasty decision.

"We're not going to sell-out regional Australia," he said.

"This is one of the biggest decisions many of us ever have to make in this place. If we don't get it right, it's our mob that hurts.

"We're going to make sure we take our time and get it right. And when we do, we'll be able a look our people square the eye and say we protected them." 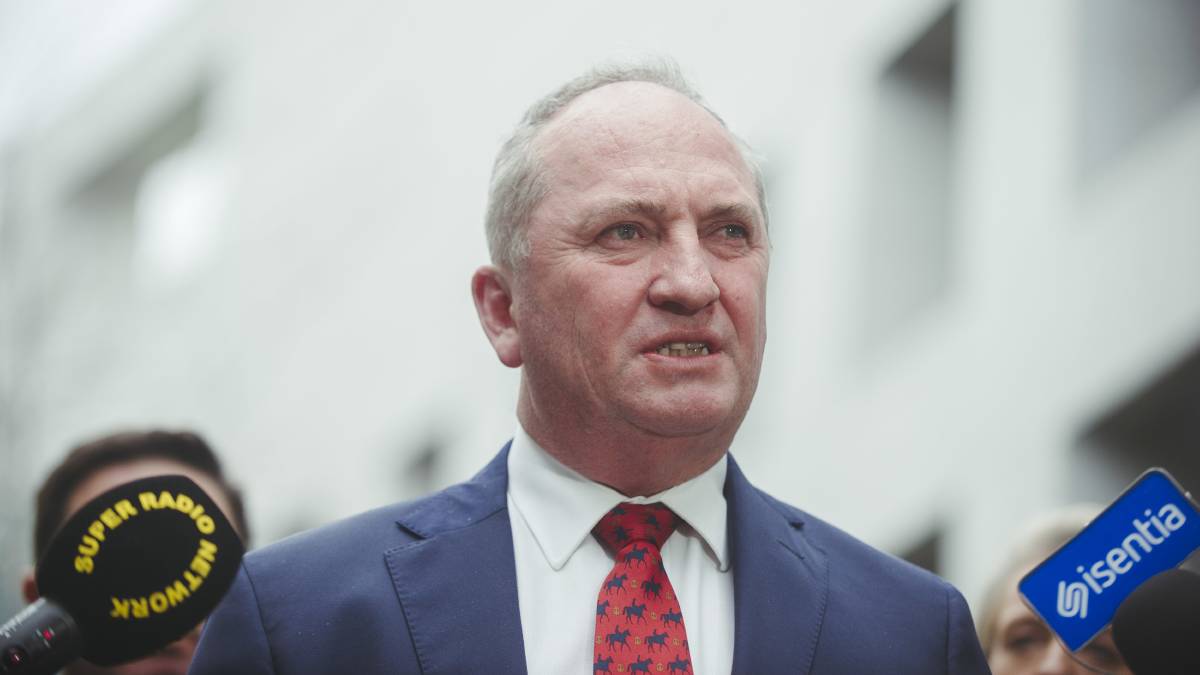 Earlier after leaving the meeting, Mr Taylor said there was "absolutely no appetite" for a climate approach which impacts jobs or raises cost of living expenses.

"There was a strong joint commitment to policies that strengthen our regions, not weaken them," he said in a statement.

"It was also clear that there was absolutely no appetite for policies that impact jobs or add to cost of living through an explicit carbon tax or sneaky carbon tax, which we won't be doing."

It came after Nationals leader Barnaby Joyce rebuffed any commitment to net zero emissions promise, adding they would not be held hostage over the decision.

Mr Joyce said he would not make a captain's call agreeing to any climate targets without the backing of the party room as pressure mounted on the Nationals to come to the table.

He conceded a decision could go "either way" but insisted he would act as an impartial moderator.

"[It's] up to the room. I am not here to dictate the way the Nationals party room works," he said on Sunday.

"Something as important as this is a decision that is not made by one person, it is not even made by the leadership movement.

"It is made by the party in general, the National Party." Angus Taylor says there is 'absolutely' no appetite among Nationals MPs for a 'an explicit carbon tax or a sneaky carbon tax'. Picture: Sitthixay Ditthavong

Australia has committed to reducing emissions by between 26 and 28 per cent compared to 2005 levels, but Mr Joyce said the Nationals backing an increase would be unlikely.

"I might get knocked over, but I'm trying to be honest with you and give you an appraisal of where I see other people. That's my appraisal," he said.

Mr Joyce would not reveal whether an evenly-split vote would prompt further negotiations with Prime Minister Scott Morrison.

"That's my business," he said.

Nationals MP Darren Chester, ousted from cabinet when Mr Joyce deposed former leader Michael McCormack, is in Canberra for the meeting. His presence ended a self-imposed hiatus from the party room over what he described as "very hard right-wing agenda" being pushed by his colleagues.

Labor leader Anthony Albanese on Sunday dismissed the meeting as a "big pantomime" without an increase to the 2030 target or a legislated 2050 target.

He framed Mr Joyce, who will be acting Prime Minister while Mr Morrison attends COP26, as a climate change sceptic intent on "wrecking" the government.

"[It] is such an act of self-indulgence to have National Party ministers, including the Deputy Prime Minister, acting as if they're not part of the Coalition government," he said.

Mr Albanese said Labor's mid-term target would be announced after Glasgow. But he refused to be drawn on whether it would exceed the 45 per cent target it took to the 2019 election. Mr Morrison is expected to make an announcement on Friday detailing the plan on climate change the government will take to world leaders in Glasgow. The Prime Minister had been hesitant to commit to attend the summit, before finally confirming his intentions on Friday.

The Liberals are attempting to push Australia towards joining the rest of the developed world in committing to a net zero target.

The Biden administration has signed on to net zero by 2050 target, joining the European Union, Canada, Japan and a host of other nations in adopting the target.

The UK has gone a step further, committing to reducing emissions by 78 per cent by 2035 compared to 1990 levels.

Mr Morrison in December did not attend a UN climate summit held in the UK, after his proposal to ditch the controversial use of Kyoto carryover-credits was deemed unacceptably weak to warrant an invitation.

Our coverage of the health and safety aspects of this outbreak of COVID-19 in the ACT and the lockdown is free for anyone to access. However, we depend on subscription revenue to support our journalism. If you are able, please subscribe here. If you are already a subscriber, thank you for your support. You can also sign up for our newsletters for regular updates.

This story No net zero agreement despite marathon Nationals meeting first appeared on The Canberra Times.