In his almost 20 years with Better Homes and Gardens there is one thing "Fast Ed" Halmagyi has never done. While he guesses they've shot close to 200 fishing stories for the popular lifestyle series, he admits to never having caught a fish on camera.

"As soon as the cameras are off however, I seem to hook them up one after the other."

Halmagyi is about to start his 19th season with the show which first aired in 1995 with Noni Hazelhurst at the helm. Current host Johanna Griggs took over in 2005. Gardening guru Graham Ross has been there from day one and resident veterinarian Dr Harry since 2004, the year Halmagyi signed up.

"It's been an extraordinary thing to be part of this show for so long," he says. "When I first signed up everything was very scripted and I knew it just wasn't going to work for me. I thought, if I can't be me, what was the point of doing it. I got some good advice from a mate who was an excellent producer and he said if you're you, you'll be able to do this for as long as you want, but if you pretend to be someone else you'll get caught out in the end." 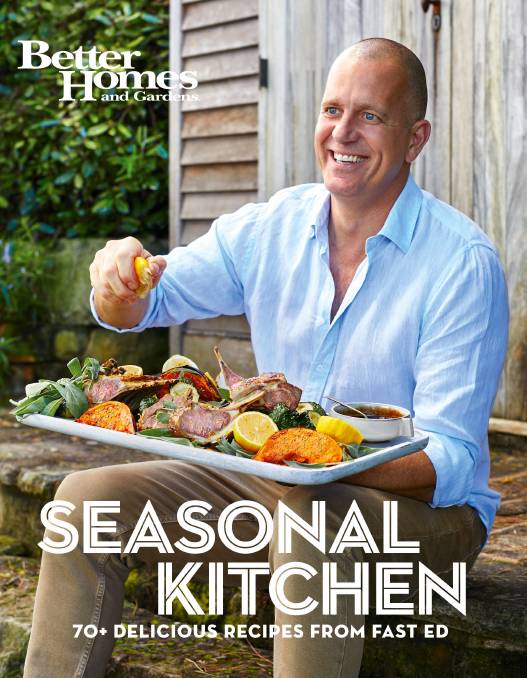 Halmagyi started his culinary career working as a kitchen hand in his teens. He was soon helping the chefs, and continued to work in hospitality during high school and university. His resume includes time at Rockpool and Bennelong.

He says his background in restaurants has helped him during the past couple years with the pandemic having its effect on the show.

"The first lockdown in 2020 happened when we were in the middle of a three-and-a-half-week shoot in southern NSW, just south of Canberra, from Cooma out to Tumbarumba, reporting about the great food and wine down there, how it really is a travel destination, how it's bouncing back after the fires and the drought," he says.

"We had only been there for a few days when the lockdown happened so we immediately started changing our content so it was more lockdown oriented and helpful to people trying to understand what it was all about. I guess that's where we're back to now."

He admits there has been some down time over the past year, but he hasn't been idle. He's just released a new cookbook, Seasonal Kitchen.

"This one's kind of different to what I normally do," he says. "Normally when I'm writing a cookbook, I'll have a narrative concept in mind where I'm trying to tell a particular story across the course of 300 pages.

Travelling across the nation with the television show has given him a great appreciation for a seasonal approach to food. 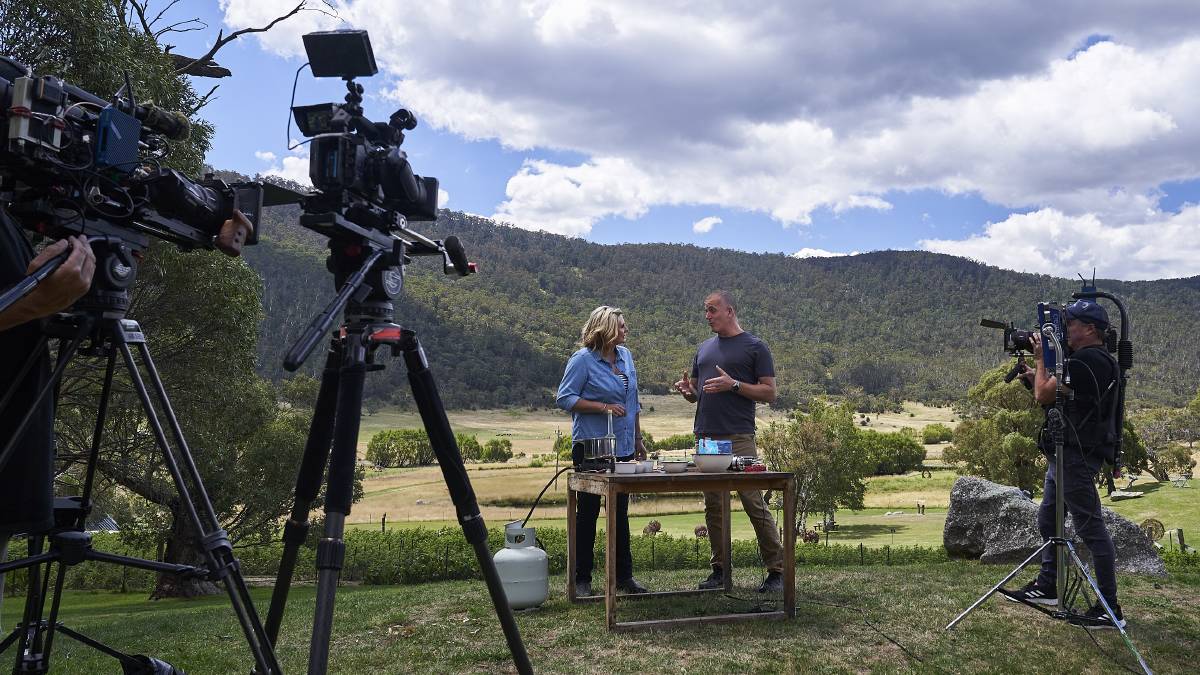 "What constitutes seasonality is vastly different in different parcels of Australia," he says. "And it makes Australia such an interesting place to cook and countries can't compete with this.

"But here in Australia we have developed four species of strawberries that flourish over winter in Queensland, so from April through to September. And then we have those which do well in spring on the New South Wales north coast, and then we've got ones that do well over a colder summer in Victoria and Tasmania.

"So here in Australia, you can enjoy beautiful, fresh Australian strawberries year round. That's something really unusual. Most Australians just take that for granted but it never occurs to them that elsewhere in the world that would be considered remarkable." 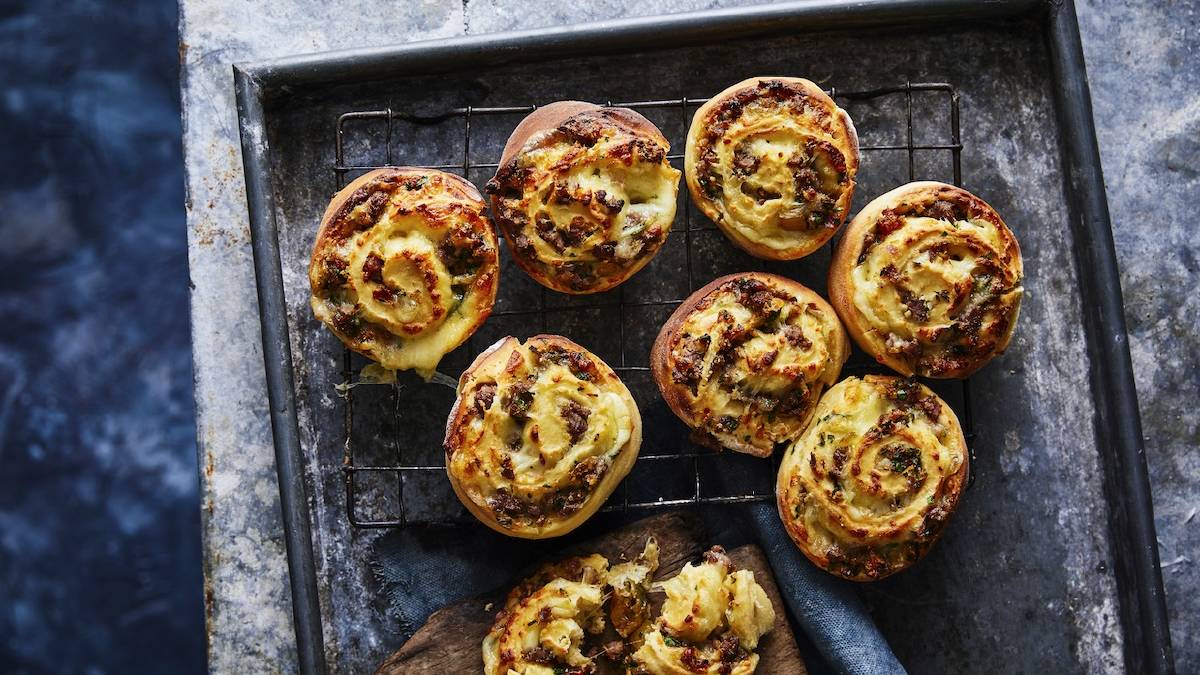 Great for breakfast or just about any time of day for snacking, these beefy mozzarella bites are more than worth the effort of making your own dough. An ideal lunchbox addition.

1. Grease an oven tray. Pour juice into a small saucepan and set over high heat. Boil rapidly until reduced to three-quarters of a cup. Set aside to cool, then mix with plain flour and yeast. Stand for five minutes, until bubbly.

2. Combine baker's flour, eggs, yolks, sugar, salt and yeast mixture in the bowl of an electric mixer fitted with a dough hook. Beat on medium for two minutes. Add butter, one reaspoon at a time, then mix to a smooth dough. Cover bowl with plastic wrap. Set aside in a warm place for 45 minutes, until doubled in size.

3. Meanwhile, heat olive oil in a large frying pan over medium heat. Cook sausage meat, onion, garlic and thyme, stirring and breaking up sausage meat as it cooks, until mixture begins to stick to the bottom of the pan. Remove from heat, then stir in breadcrumbs, relish and parsley. Set mixture aside to cool.

4. Turn dough onto a lightly floured bench and roll into a 60x30cm rectangle. Spread cold sausage mixture and mozzarella on top. Starting at the long edge, roll up tightly into a log. Cut into 12 even rounds. Arrange on prepared tray, cut side down. Cover with a clean tea towel and set aside for 45 minutes, until doubled in size. Preheat oven to 180C fan-forced (200C conventional). Bake for 25-30 minutes, until golden. Cool on a wire rack before serving. 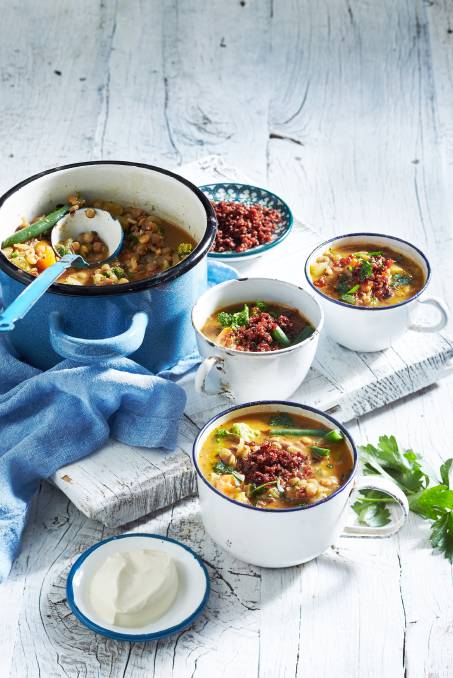 Why would you ever reach for a can of soup from the pantry when you can cook this hearty, beauty in no time at all?

2 cups mixed vegetables (such as celery, carrot or broccoli), chopped

1. Place chorizo in the bowl of a food processor and pulse until it forms fine crumbs. Fry crumbs in oil in a large saucepan over moderate heat for 10 minutes, or until very crispy. Scoop out with a slotted spoon and set aside, leaving oil in the saucepan.

3. Mix butter and flour in a small bowl to form a paste. Stir into the simmering soup and cook until thickened. Fold in parsley, then serve topped with the crispy chorizo and a dollop of sour cream. 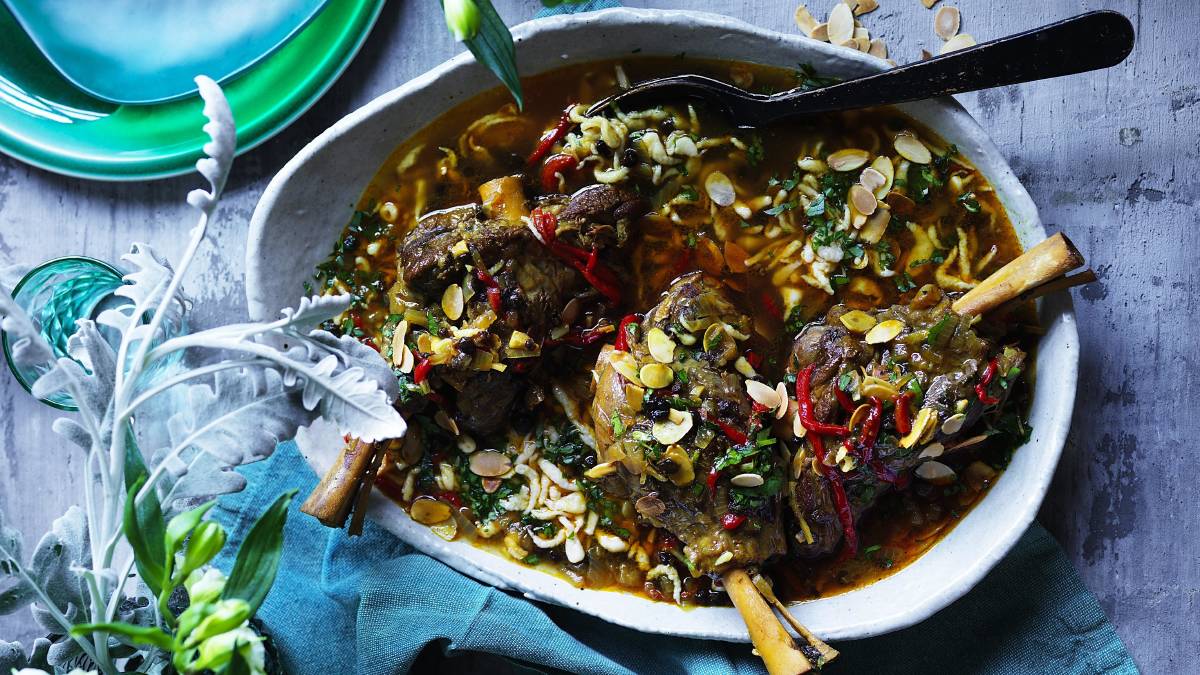 1. Set a large heavy-based saucepan (with a lid) over medium heat. Fry shanks in ghee for five minutes, turning regularly, until very well browned. Set aside on a plate. Add onion, garlic and ginger to pan and cook for five minutes.

2. Pour in sherry, boil briefly, then add stock, spices and currants. Once simmering, return lamb, fit lid and cook for one and a half hours. Mix in capsicum and cook for one more hour. Remove lamb and keep warm, then boil sauce gently to thicken.

3. Meanwhile, whisk eggs, milk and flour until smooth, then season with salt. Pour into a large-hole colander set over a saucepan of boiling salted water and press through. Once floating, scoop out and place in sauce. Add chopped parsley, season with salt and pepper, then serve with lamb shanks sprinkled with almonds.

Tips: It's important to brown the lamb shanks first to help seal in the juices, make the meat tender and ensure caramelisation. 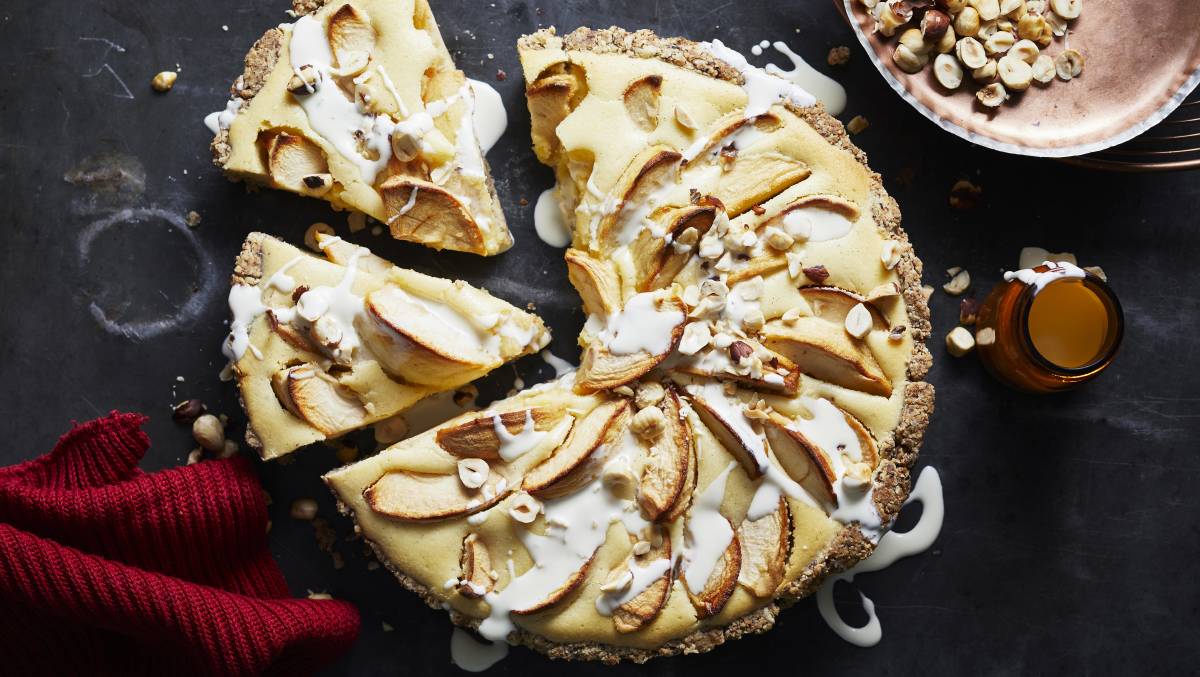 This easy, elegant and tasty tart will be your new go-to dessert when you want to treat the family.

1. Preheat oven to 180C fan-forced (200C conventional). Peel and core apples, then cut into thin wedges. Toss with two tablespoons of the sugar, then bake on a wire rack placed over a baking tray for 15 minutes.

2. Meanwhile, mix hazelnut meal, half of the flour, butter and two egg whites, reserving yolks, into a paste. Press into a 22cm tart tin and chill briefly until firm. Whisk eggs and reserved yolks with remaining sugar and flour, vanilla seeds and cream.

3. Pour cream mixture into tart tin, then top with apple. Bake for 30-35 minutes, until filling is just set. Cool tart completely, then serve with extra cream and hazelnuts.

This story A seasonal kitchen: living the slow life with Fast Ed first appeared on The Canberra Times.