ORGANSIERS of the 2021 Royal Bathurst Show certainly deserve a sustained round of applause following the great success of the event.

From a standing start every section was well patronised, three lovely autumn days were given and excellent crowds were reported each day.

The council provided buses from a carpark in Hereford Street to the showground and they were heavily patronised and much appreciated.

Every volunteer and helper deserves a thank you and the best quote I heard was: "Don't Col McPhee and Brett Kenworthy look exactly like a show president and secretary should."

EVERY show exhibitor deserves praise as their contributions are highly valued.

Lots of car, truck, tractor and machinery exhibits give a real country feel to a local show.

Families appreciate the community stage and the hundreds of plastic chairs where groups can meet for a catch-up and listen to the youngsters entertain. Great idea, AH&P.

AS this column is being written there is a forecast of 25 millimetres of rain on Tuesday and I hope this has come true by the time the papers are read on Thursday.

Our green autumn has dried off rapidly during a rainless April and later sown fodder crops are looking thirsty.

We must all be mindful of the serious fire risk in very dry grass and undergrowth in timber. A lot of properties are greatly understocked for a variety of reasons and land that was solely bought for capital gain looks quite abandoned.

All classes of livestock are expensive, even the once humble goat is priced out of many budgets, and lots of landholders are waiting for prices to come off the boil.

If current livestock values are to be maintained every market driver has to remain foolproof and a month's dry weather has already caused a few very deep breaths.

Controlled burns with water tanks and capable personnel on hand are a different issue. Angle grinders, welders and chainsaws are best left indoors for a while as one of our worst fires is the setting of a grass fire that is our fault.

The weather wheel will keep turning and the approaching Winter may be cold and wet, but we need to be patient for a few weeks until our weather changes.

THE conversion of older shearing sheds to a raised board configuration was seen as a logical answer to WHS risks and a smoother passage for wool from sheep's back to woolpress.

Recently built template sheds (with Australian Wool Innovation funding) have reverted to flat floor shearing boards and reasons given include proximity of active handpieces to shed hands' faces and hands and a risk of shearer over balancing and falling several metres.

A LONG-TIME friend tells me of the large amount of weeds and young willows in the Macquarie River just below the Eglinton bridge and this must choke the river flow when a major flood arrives at some future date.

Photos are included in the current Perthville newsletter of some of our forebears using draught horses and scoops to dredge concreters' sand from the bed of the Vale Creek some decades ago.

Councils are hamstrung by environmental laws at both state and federal levels but both Calare and Bathurst electorates are currently represented by conservative members.

Surely these members should be pressured by rational arguments that request river and creek clearing as we know that one day there will be major floods in our district.

Politics should be put aside as, once again, "we're all in this together".

WHILE the usual voices are being raised about council decisions on local matters it's interesting to hear some other comments. Just a few remarks from showgoers:

* If car races weren't already established at Mount Panorama, they probably would not be permitted in 2021. Someone would be insulted.

* Sheep would not be allowed to be shorn nowadays, wrestling and frightening the animals would be offensive.

* If staff were bullied at present as they were a decade ago, the perpetrators would be shown the door. They should have been shown it then. 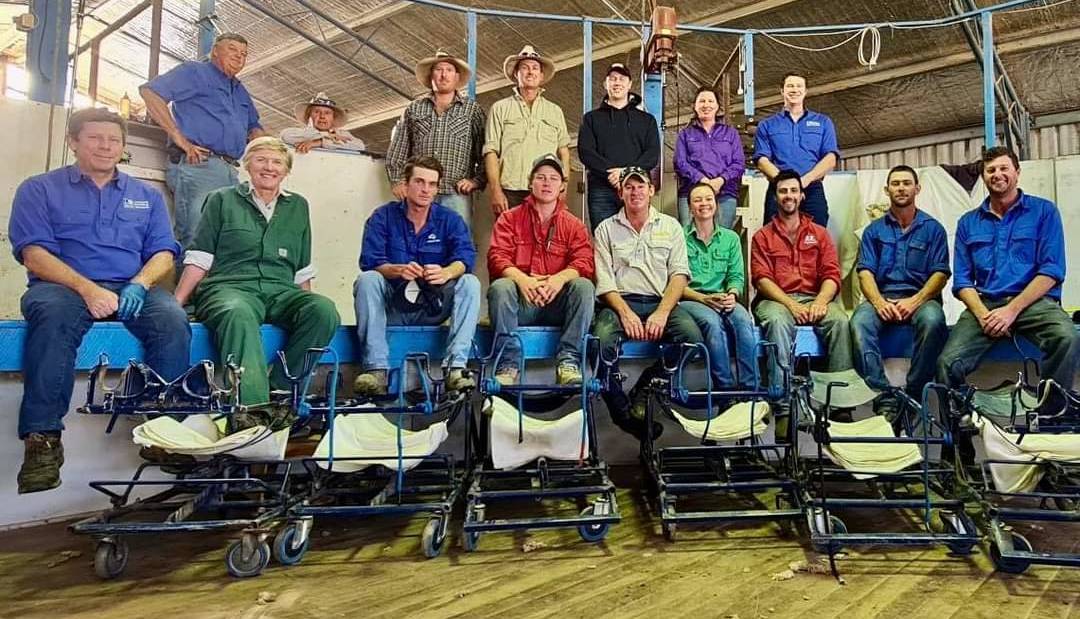 EWE RIPPER: The team who artificially inseminated 900 young merino ewes to a cross section of stud sires on a Newbridge property last week.

BRETT Littler advises of an Local Land Services beef event at Lyndhurst on Thursday, May 13 with lots of information and practical sessions in the yards.

There's no charge but bookings are essential at www.trybooking.com/BQHIB or by phoning 6378 1708.

THE Federal Government has retracted the Belts and Roads deal that was signed between the Victorian Government and China.

The Chinese markets are vital for most of our agricultural produce and we rely on much of this trade to sustain market levels.

Reports of easing markets for some types of store cattle are appearing.

Joined heifers (not preg-tested) have eased by up to $200 and vendors with joined ewes (both Merino and cross-bred) are intending to lamb them down rather than accepting the scanned-in-lamb price being offered.

These decisions mean that probably 16 weeks will elapse before mobs of ewes and marked lambs can be offered for sale.

THE Australian wool market has continued its upward movement over the past week with the Eastern Market Indicator (EMI) closing at 1342ac/kg with a 30ac or 2.29 per cent rise.

In US dollar terms the rise was even more significant with the indicator up 3.36 per cent. This is a positive considering the large offering of 47,446 bales for the week.

All merino micron price guides were up to 50ac/kg dearer with lower vegetable matter lots sought after. Merino carding types were also stronger.

Unfortunately, the cross-bred wool market continues to be subdued with the 26 and 28 micron indicators closing basically unchanged for the week.

Chinese activity has been dominant and resilient in the past year and while this customer continues to be our main buyer it is obvious that European and sub-continental users are now far more active in our wool market.

This, in turn, is causing more auction room competition to move the market higher.

Large quantities continue to flow into the system with an estimated 48,245 bales rostered for week 45, whereas there were only 25,338 bales available for sale in the same series last year.

It now seems these larger offering are not having a detrimental effect on the merino types. The cross-bred sector, however, has not been affected in a such a positive manner.

SHE was a determined driver and was pulled over in a town street.

She blushed and replied: "Oh no, sir, it's these damn new glasses. I've just turned 54."

ONCE we turn 75 we start to regret the sins we did not commit.

TWO old men were shuffling down William Street, each dragging one leg.

"What happened to your leg old mate?" asked one and was told: "55 years of shearing has caught up with me."

His mate asked the same question and got the reply: "Trod in filthy dog poo two blocks back."