So says footballer, boxer and respectful relationships ambassador Tayla Harris, who is clearly playing the long game in her campaign against gender-based online abuse.

A star player in the AFLW, Ms Harris has led the fight against online bullying and disrespect towards women since a photograph of her kicking a football became the target of sexualised social media trolling in 2019.

Famously re-sharing the photo after it had been removed from social media due to the trolling, she captioned the spectacular action shot, "Here's a pic of me at work ... think about this before your derogatory comments, animals".

Many of the comments made on the post were reprehensible & we'll work harder to ban trolls from our pages.

Since then, Ms Harris has used her experience to highlight offensive online behaviour - speaking out as an ambassador for Our Watch, which works to prevent violence against women, and as co-author of a book to help young people deal with social media.

"I will continue to push on and advocate for equality and end this onslaught of online abuse, because it's not something I am going to accept," the Carlton player said after being named Victoria's Young Australian of the Year for 2021.

Also among the finalists in the category are brothers Daniel and William Clarke, whose efforts to protect the critically endangered orangutan of Borneo and Sumatra has won global praise.

Speaking to journalist Stacey Whitlock of ACM's Redland City Bulletin after they were named Queensland Young Australians of the Year, the Clarkes said they hoped 2021 would see them reach a milestone they had been working towards for more than a decade: raising $1 million for their cause.

"Everyone can make a difference, no matter how big or small it is," William said. 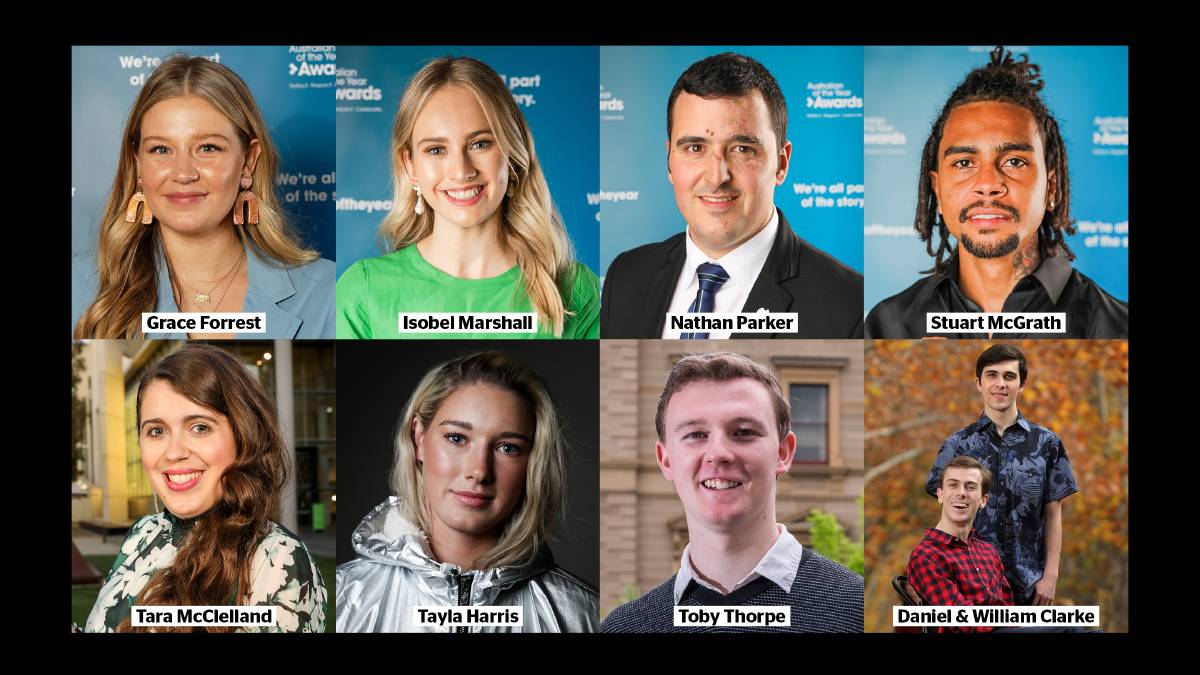 The Young Australian of the Year nominees for 2021. Pictures: supplied by australianoftheyear.org.au

GET TO KNOW THE FINALISTS

The following biographies of the 2021 Young Australian of the Year finalists have been supplied by the organisers of the annual awards, the National Australia Day Council. ACM, publisher of this masthead, is media partner for the awards. 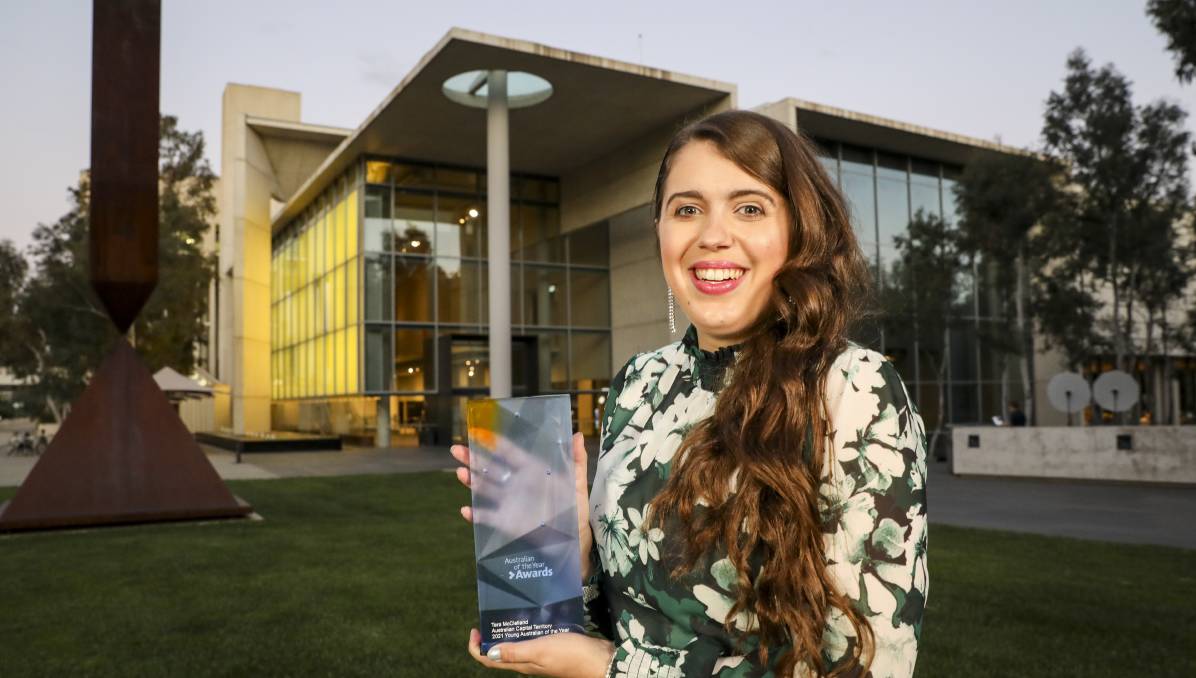 Tara McClelland with her ACT award. Picture: supplied by australianoftheyear.org.au

Tara McClelland (ACT) - Advocate for the rights of young people

Tara, 24, works tirelessly to support and advocate for the rights and wellbeing of the ACT's young people.

In her professional role as Youth Worker with the Salvation Army, she works with 16- to 25-year-olds experiencing, or at risk of experiencing, homelessness, helping to expand their skills while in crisis accommodation. She is particularly passionate about advocating for young people's mental health issues, which is the focus of her strength-based empowerment practice.

Tara also dedicates her free time to volunteer work with the Youth Reference Group at Headspace Canberra, where she helps apply for funding, organises events to support mental wellbeing, and holds school information sessions. Tara is on the Canberra Youth Theatre's Youth Artists Advisory Panel, and has assisted the Children and Young People Commissioner's office with their work on family violence.

Her significant contributions have been recognised with a commendation for a 2019 YOGIE Award and a nomination for 2020 Young Canberra Citizen of the Year.

Lismore's Nathan Parker, 25, was on the way to his dream job as a fighter pilot when a military bus accident left him badly injured and his left hand amputated. Despite his injuries, Nathan returned to civilian flying in three months, resuming military and university duties within seven months. He was the first upper-limb amputee in the Australian Defence Force Academy's history to complete his final 12 months and graduate.

After completing his degree in 2017, Nathan was medically discharged in 2019 to become a commercial pilot. He works as a senior RA-Aus flying instructor in Lismore, obtaining his commercial pilot's licence and achieving his aerobatic endorsement.

Stuart McGrath with his NT award. Picture: supplied by australianoftheyear.org.au

Aged 30, Stuart has already been exposed to experiences which give him special insight into the needs of different community groups - from his nomadic upbringing in remote Indigenous communities, to schooling in Canberra and studying in Darwin.

Stuart has overcome significant challenges to follow his dreams - including completing his first year of a Bachelor of Nursing degree remotely while working full-time and being a father to two young girls. He helped produce the Ask the Specialist podcast, with the Menzies School of Health Research, to improve communication between health professionals and patients.

A natural leader, Stuart is committed to closing the gap between Indigenous and non-Indigenous Australians. He hopes his passion for helping his community will inspire other First Nations young people to participate in the health workforce, leading to happier and healthier lives. At just 18 years of age, Adelaide's Isobel Marshall launched a social enterprise business to help women around the world fight the stigma around menstruation and provide greater access to hygiene products.

With business partner Eloise Hall, she founded TABOO after crowdfunding $56,000 to launch their range of products in August 2019. TABOO sells ethically sourced, organic cotton pads and tampons to an Australian market, with 100 per cent of net profits going to One Girls - a charity providing education programs for girls and women in Sierra Leone and Uganda.

In South Australia, Isobel and TABOO have partnered with Vinnies Women's Crisis centre, providing free access to pads and tampons for women who require emergency accommodation. Recognising that "period poverty" is not just a big city issue, they also support the Ngaanyatjarra Pitjantjatjara Yankunytjatjara Women's Council.

Isobel, now 22, is also a full-time student at the University of Adelaide, where she is studying a Bachelor of Medicine and a Bachelor of Surgery.

Daniel and William Clarke with their Queensland award. Picture: supplied by australianoftheyear.org.au

Daniel and William Clarke (QLD) - Conservationists for the endangered orangutan

Brothers Daniel, 24, and William, 22, from Redland City in south-east Queensland, are passionate conservationists for the endangered orangutan populations in Borneo and Sumatra.

Since 2008, they have highlighted the species' plight and raised more than $900,000 to help protect the animals. The funds have supported orangutan care centres by building new holding enclosures and enabling investment in veterinary equipment. The brothers have also sponsored more than 50,000 hectares of orangutan habitat and adopted more than 100 animals.

Their literary work on orangutan conservation has been incorporated into the NSW Department of Education curriculum. To date, the brothers have spoken in at least 80 schools to more than 60,000 students Australia-wide, inspiring other young people to make a positive difference in the world. Daniel and William are regularly invited to speak at events to address industry leaders and politicians on sustainability and the environment. Their conservation efforts have been recognised by former US President Barack Obama and Dame Dr Jane Goodall. Toby has twice led the Tasmanian Youth Delegation, as part of the United Nations Climate Change Conference. He worked to enable students to meet Australian Government representatives as well as international changemakers such as Greta Thunberg.

Toby is executive director at the Climate Justice Initiative, which runs in-school workshops to help young people understand their power to make a positive impact and connects them with activists around the world. Tayla Harris, 23, is a young Australian athlete making her mark on the sports field and beyond. As a footballer in the AFLW, she was Carlton Football Club's leading goal-kicker in 2019, receiving the JLT Mark of the Year Award for two years running. In boxing, Tayla holds the Australian super welterweight title and is undefeated in eight professional fights. After a photograph of Tayla kicking a goal became the target of sexualised trolling online in 2019, she courageously used this experience to fight online bullying and disrespect towards women.

Tayla is now a powerful advocate for respectful relationships. She is an ambassador for Our Watch, an organisation working to prevent violence against women. She is also active in Carlton Respects, a Carlton Football Club community initiative that promotes gender equality in Australian schools and workplaces. Her co-authored 2020 book, More Than a Kick, provides advice to young people on how to navigate social media and deal with online bullying.

Grace Forrest with her WA award. Picture: supplied by australianoftheyear.org.au

Perth's Grace Forrest, 27, is the founding director of Walk Free, an international human rights organisation working to eradicate modern slavery, which affects more than 40 million people globally. Together with the all-female Walk Free team, she developed the Global Slavery Index, the world's leading data set on measuring and understanding modern slavery - informing international legislation. In 2018, Walk Free successfully campaigned for the implementation of an Australian Modern Slavery Act, which received the support of both major parties and the business community.

In recognition of her work and impact, Grace was appointed the United Nations Association of Australia's youngest-ever Goodwill Ambassador for Anti-Slavery. She continues to be a voice for the UN in Australia and abroad.