She picks up the phone, puffing away. The running session has just ended at Karen Rolton Oval. The morning is the new normal for Courtney Webb. Right down to an outdoor preseason in July.

"We've got some good weather, so we're outside practicing on turf wickets, which is so good," Webb says, still gasping for breath.

"It's a bit different from Tassie where the weather is not so good until later in the year when you get access to outdoor facilities."

The noted clean striker of a cricket ball has never timed shots better since walking out on Tasmania and uprooting a hectic life between Adelaide and, at times, Melbourne.

This shot is about more opportunity after rejecting a contract offer just last month and all but ending sporting ties with home.

But it's more than South Australia versus Tasmania; it's cricket versus footy for Webb.

It is harsh for a 20-year-old to mull over, but sound reasons are given for quitting an AFLW career at Carlton after just two years. DRIVEN: Webb looks to drive her right boot into a kick at Ikon Park during a brief AFLW stint. Picture: Carlton Media

"It was a pretty hard decision to go one way or another, but in the end opportunities I've met through cricket and all the female programs they have now is just too good not to be a part of when given that," she remarks.

"I went down that path - I made that call at the end of last summer. I had picked up an injury at the start of the AFLW season so that's the last season with that concern.

"So it was just a few little things that were getting just a bit difficult to manage and I really just wanted to succeed in one of the two sports, so I had to make the decision now because I didn't want to have to split my time to be just fairly okay at both.

"I'd wanted to commit myself to one, give all you've got and apply yourself to that one skill, just so to give it a red-hot crack.

"That is what I am doing at the moment, what I probably will do for at least the next few years, but I'll just see how I go."

That love of football always coincided with cricket and heightened four years in during the 2017 Launceston TSLW grand final win.

Webb stood out that day, called up to the dais to collect the best-on-ground medal. 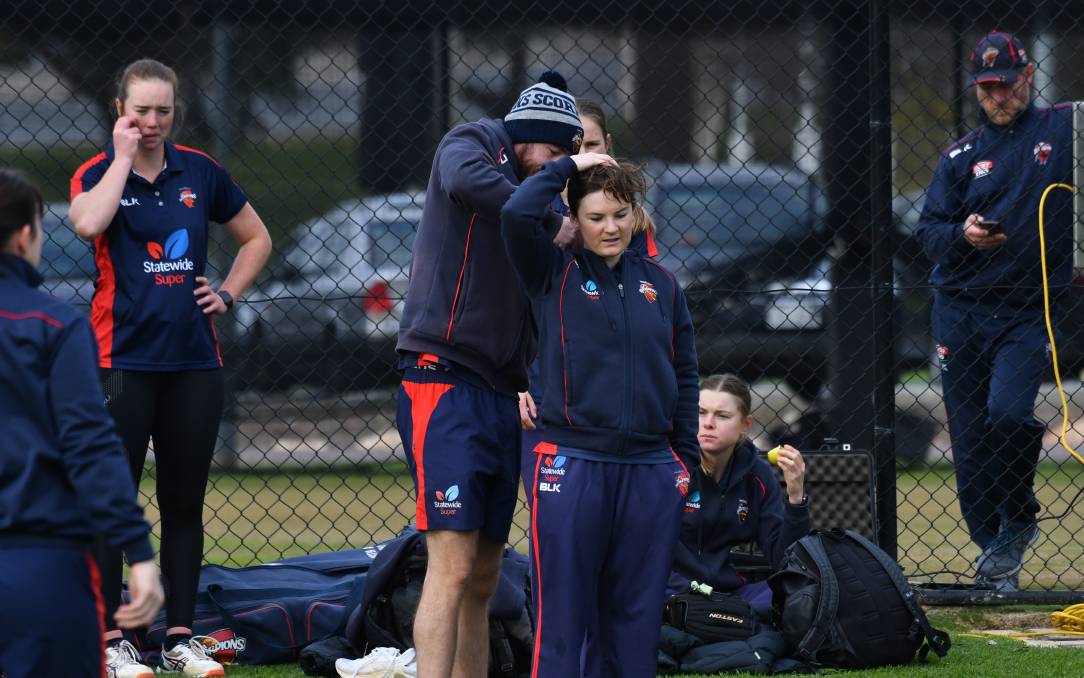 North Melbourne AFLW teammates Jess Duffin and Jess Cameron bring out balls, but it is Tarlia McGrath with a Cricket Australia national contract put into deep pockets that shows them all up roosting 50-metre bombs.

"I already have had a kick with a few of the girls and to be honest most of them probably kick better than me," Webb grins, "so that's a bit intimidating because they have some absolute guns over here in the cricket side."

But with no real offseason in the winter, playing for a suburban side is just out of the question. Or one that Webb has never asked.

"I just haven't had the conversation to be honest. It's probably not worth having from where I'm at the moment, really," she says.

It's barely 700 kilometres from Adelaide, but a world away from where Webb was once located at Princes Park for Carlton.

The AFLW is ran parallel with the cricket season. One week the footys were put away and the bat was pulled out of the kit bag.

Some times on the same day it was that chaotic. So much so that she could have walked out in boots rather than spikes.

"There was absolutely a few crazy times like that," Webb is quick to admit.

The cricketer had to fly from one game in Perth for a Carlton session in Melbourne and get from the airport within half an hour. FOCUSED: Courtney Webb mulls over her cricket journey while warming up in the South Australian team nets. PIcture: SACA Media

"And you know that's pretty hard to do in a city like Melbourne - it's not Launceston, that's for sure," she laughs.

The organisations knew and understood Webb's dual commitments and never once dared put a stop to one or the other.

Even though WBBL weekends away at the Melbourne Renegades would ensure she'd miss one of every three footy training runs.

For assured the right-hand middle-order batter, time at the dark old navy Blues has only endeared her growth to consume all the intensive preparation for matchdays.

"I actually do think both of them helped each other in many ways," Webb adds.

"There's the off field stuff with your work ethic, professionalism and just being an all-round team person in both of the sports.

"Cricket is more individual, but what I got with the experience at Carlton was amazing.

"We did a fair bit of work with the men's program and had support staff that were in the men's and women's program, so I got a bit of an insight what a full-time professional footballer's lifestyle and personality was like as well from them to get to the highest level. "Just all the little things that you gain from being in a completely different, professional environment. Both being two of our most loved sports of the country, it's amazing how different they both are around all facets."

Webb has always been the first girl of her age to play sport with the boys. That started out with Auskick early on in primary school.

"I might have been the only girl in my age group when I played - it's pretty intimidating when it's just you in the sport," she says.

"You just sort of don't like to see that when you're so young. You just do it because you love it and when you've got very supportive parents, who just want you to do whatever you want, that makes it easier as well."

The peer that pushed Webb to the verge of cricket stardom is realising some of her own.

Emma Manix-Geeves was named in the very same and first girls' under-15 state side.

They pushed each other as rising batting allrounder and the wicketkeeper-batter.

So much so the elder made a name in the all-conquering South Launceston teams and the other the heartbeat at Riverside. 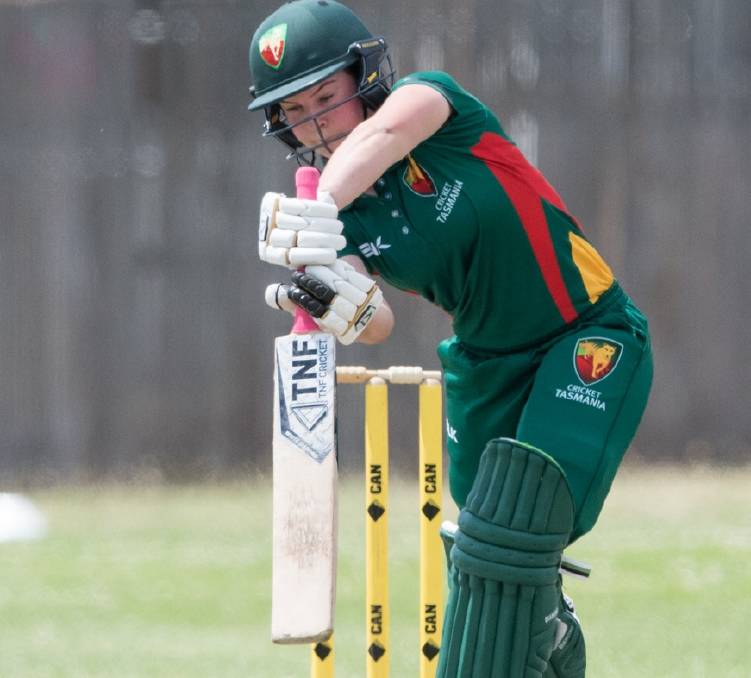 FULL FACE: Webb drives through the line during one of her standout days for Tasmania at the under-18 national championship. Picture: Cricket Tasmania

Manix-Geeves has turned her back on the Tigers selectors to ambitiously relocate to Victoria, a state the indigenous talent has represented at their national titles when Tasmania has been unable to field a squad.

"Growing up just around the corner from Emma, we were always quite competitive and loved going to the nets together when we had opportunities to go," Webb explains.

"We were always quite competitive with one another and that has sort of drove us."

It was that very first national tournament with Manix-Geeves that triggered something in Webb. She did not hide from it then and has taken ownership of it now.

"I was probably the worst in the team and I thought I needed to get my act together to ever make that team again," Webb concedes.

"That's when I started really training hard and eventually worked my way up. It was the first realisation that I can go somewhere with this when I was in the under-15 team of the tournament in my last year."

An email was sent soon after to a 15-year-old Webb to head to that national camp on the back of a top tournament performance before her name was being whispered inside the echoing corridors of Cricket Australia. It took a couple more years and Webb was in the Australian under-19 side where the Riverside High student rescued the visitors from almost certain defeat early in the tri-series final against hosts South Africa.

"That was the first sign that this was what I want to do and I am going to do everything I can to keep coming back," she says.

That sort of finishing roles has been what Webb has built her growing short-form T20 game around at the Melbourne Renegades.

The consistent late-order knocks went to another level once against the Sydney Sixers.

Needing 15 off the final over and a six off the final ball, Webb squatted the winner over cow corner that landed just metres away from ecstatic Renegades teammates.

Webb was thrust in the national spotlight on free-to air-TV, giving way to a new reality.

"To see the development of that over five to six years from when I was involved in the under-age stuff and you're on TV playing games on the weekend and there's hundreds of thousands people watching around the country, it's really surreal," she says.

"It's not something that you think of, so it's very crazy how far it's come and how lucky I am that it has grown so quickly."

This story Courtney Webb is living her best life right now first appeared on The Examiner.