The 2019 Astley Cup is fast approaching and Bathurst's quest for a third-straight crown will kick-off in Dubbo. But what makes the school sport competition, one of the oldest in the country and embarking on its 96th year, so special?

As an outsider, when you hear 'Astley Cup' you often need a double take and the eventual route goes down Rick Astley road ... you know the one.

'Never gonna give you up, never gonna let you down', that sort of thing.

But for generations that have progressed through high schools in Orange, Dubbo and Bathurst the Astley Cup means so much more.

Simply, nothing conjures up school spirit quite like the Cup.

Well, for just about a century the oldest inter-school sport competition in the country has a funny knack of producing incredible stories.

Here they are, your #AstleyCup18 champions - Bathurst High School. pic.twitter.com/RcnAS11dN2

Dubbo winning the first Cup in 1923 one of those. Bathurst snapping a 21-year Cup drought in 2010 is another.

Terry Baker's time at Orange High was smack bang in the middle of that run.

He started at Orange High in 1993 and then finished as school captain in 1998, helping the hornets to a narrow win in what he calls "a special year".

Baker's now a teacher at OHS as well and prior to this year was the head of the PDHPE department for a decade.

Basically, Astley Cup has dominated every June-July of Baker's life since the mid-1990s, and he loves it.

"It's the tradition of it," Baker lights up.

It's a memorable aspect of schooling and people love it.

"It was well drummed into us as school. Astley Cup is a significant, community event.

"It was just such a really cool event that meant a lot to those who'd been before us and every time we were winning it, there was always the pressure of winning it again."

Baker's never lost an Astley Cup as a student.

An enviable record for those currently at school, particularly given the competitive nature of the competition in the last decade.

The wins, though, aren't what Baker remembers the most.

"I remember getting in the bee suit and having a barney with the Bathurst bear," he smiled.

"We were wrestling and the teachers got in and said 'that's enough'.

Confirmed, locked and loaded, Bathurst is the 2018 champion, a second consecutive title. They knew it too, right down to the last point.

"So I hopped out of the suit and we had a girl jump in the bee and the bear mustn't haven't have seen that happen ... and he's come out of nowhere and barrelled the poor girl.

"It was quite funny."

Pete Shea's another who enjoyed the run of wins, the hockey master coach joining the OHS faculty in 1996.

He remembers the disco when teams used stay overnight on away legs and says, while times have changed, "you can't create school spirit the way Astley Cup does".

One story sticks out for Shea. 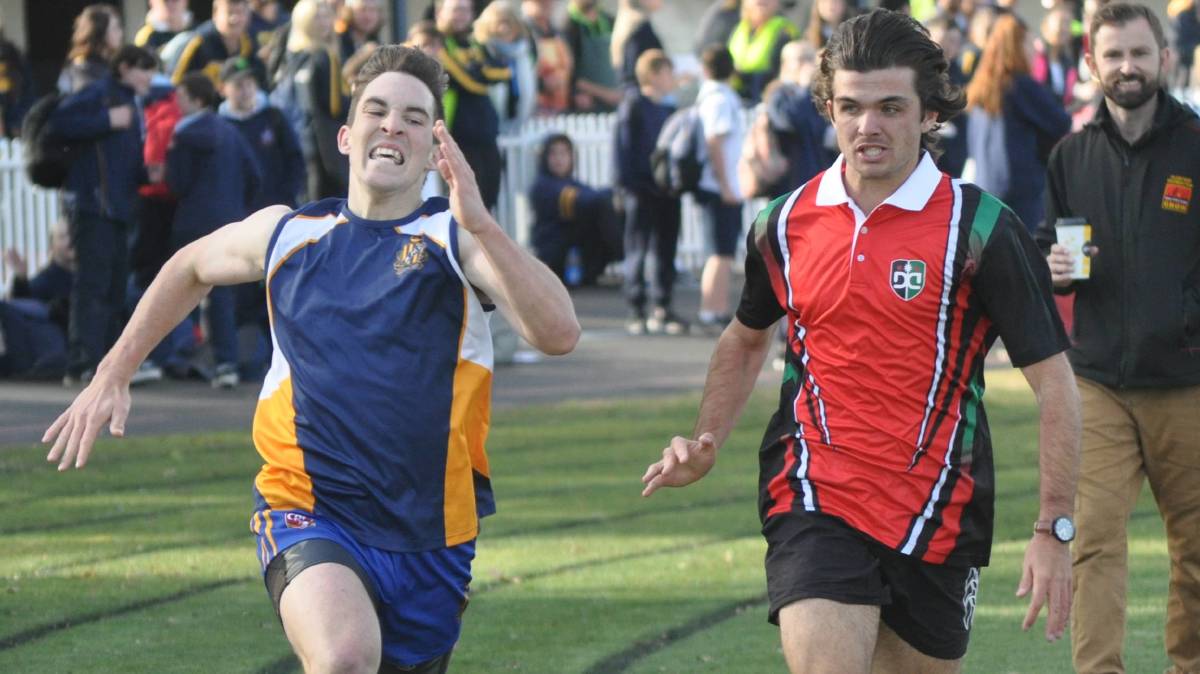 "I remember Adam Shepherd at the shot-put, and they had two sets of balls and the Dubbo guys came up and said 'we'll use these ones and you use those ones' ... but they picked the 12 pound balls and left the 10 pound ones for Adam and the others.

"It was Orange High first, second, third and we didn't tell anyone ... it's those funny things people clearly remember.

"So if you're an outsider and you straight away think: 'what's this thing called Astley Cup?'

"It's a memorable aspect of schooling and people love it."

'The end game is to win': Dubbo hoping to break Cup drought 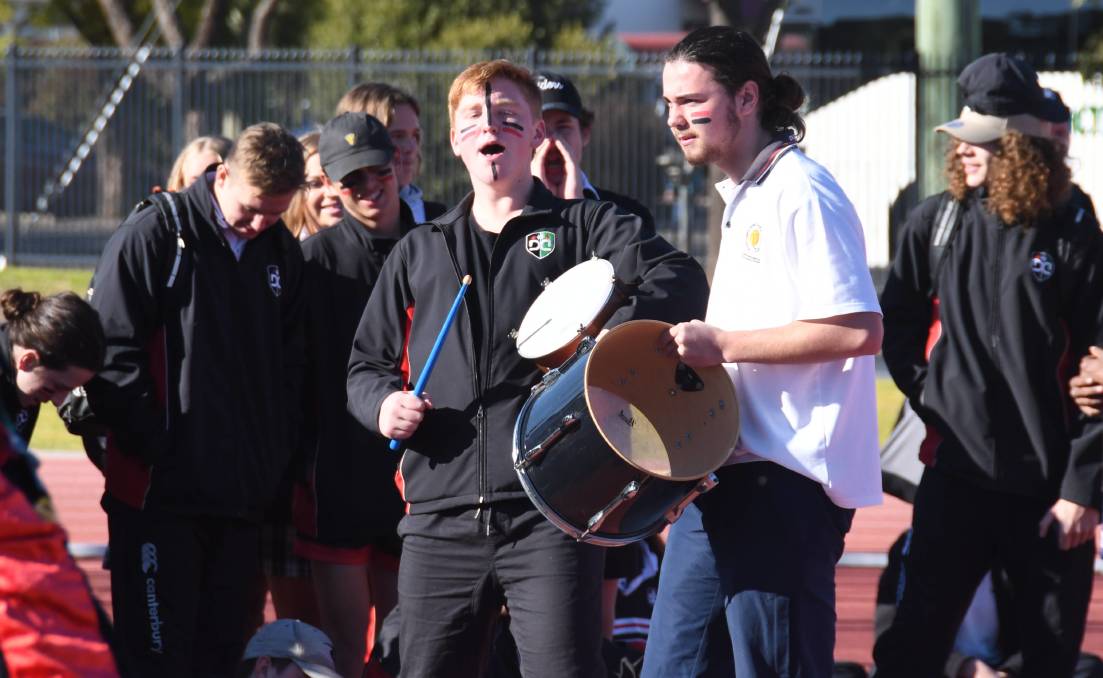 Craig May knows as well as anyone how important it is to kick-off an Astley Cup campaign with a win at home.

He was part of victorious campaigns as a Dubbo High School student in 1984, '85 and '86 and was a teacher when the school snapped a 16-year drought and won again in 2002.

Starting fast and, as May says, "maximising points in every sport" the key to those wins.

This week his Dubbo College senior campus group has to start fast.

The Dubbo school will host two-time defending champs Bathurst High School on Thursday and Friday and although May's school hasn't held aloft the Astley Cup since 2011, they last year ticked a box they hadn't in some time.

Dubbo won its home leg against Orange in 2018, a victory that marked the school's first tie win since that same successful cup campaign in 2011.

May says there's only one goal for the 2019 senior campus athletes. CHEER, CHEER: The parochial nature of the Cup always makes for a great atmopshere on the day. Photo: BELINDA SOOLE

Music to the ears of a town - Dubbo has won 24 times in 96 years - starved of Astley Cup success?

"I think so, the two gets behind it. So many people in the community go through the school and this is a tradition.

"Fathers and grandfathers before these kids have taken part in the Astley Cup. I can't tell you how often I hear 'is this the year Dubbo college wins?' Or 'how competitive are we going to be this year?'.

"It's self-perpetuating, the kids see the cup and the traditions and they carry them on ... we make sure they're aware of the competition and the spirit it takes to be part of." Scrap Christmas and hold off all the birthday cake, the only thing Bathurst High School student Sophie McCauley wants in 2019 is a fourth Astley Cup crown.

The 17-year-old has been an integral cog in one of her school's best Astley Cup periods, helping BHS to three crowns in her time at secondary school.

Bathurst has back-to-back titles in its pocket heading into the 2019 series, too, and McCauley said the best way for her to finish her time at the school is by picking up a three-peat - the school's first in over 50 years.

As she's done every year since debuting in Year 7, McCauley will feature in the tennis and girls' hockey.

Bathurst kicks off its Astley Cup defence on Thursday in Dubbo and McCauley says her hockey side will be a touch depleted but expects the tennis squad to again begin the tie on the right foot. REMEMBER THIS?: Sophie McCauley produced one of the moments of last year's Astley Cup, helping her BHS hockey side to a remarkable win over Dubbo. Photo: NICK McGRATH

"I think it's how involved the community gets. Everyone is really supportive of the school come Astley Cup time," she added.

"We'll have a fair few hockey girls out for the trip to Dubbo but we're hoping to pull through and get the win."

Scott Brown is another BHS Year `12 student hoping to end his time at school with another Cup victory.

Brown's been part of the Cup since Year 8 and this time around will take part in the athletics, boys' basketball and the much anticipated rugby league clash with Dubbo College Senior Campus.

"It'll be a great experience to make it three in a row," Brown said.

... the competition is always tough. Orange and Dubbo are strong schools. It's going to be interesting to see how it goes.

"But the competition is always tough. Orange and Dubbo are strong schools. It's going to be interesting to see how it goes."

Jess Kennedy will lead the school's quest for Mulvey Cup success and the 17-year-old said while there's an element of "glory" attached to Astley Cup success she's confident the school's students and alumni are also right behind the BHS debate team.

"It's just about working as a team and forming strong arguments to get the victory," she added, hoping for a political-based debate topic this week in Dubbo.